Perhaps I should talk about the characters from my books more? 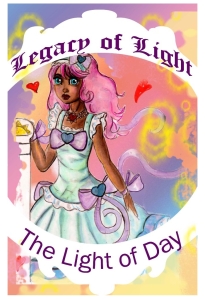 Star is a magical girl and while she is very powerful, she is socially inept.    She’s not insecure.  Due to her isolation she has no little tact, and says what she’s thinking. She also keeps people at a distance since she doesn’t want them to become collateral damage from random demon attacks. She does eventually make friends with the other knights, so we’ll see a tight bond form between them, later on. Family is very important to her as well, since finding her twin brother Nova is her main motivation in the first book.

Star Chiara is the (reincarnated) princess of the silver sun kingdom.  Immortality works a little differently in this story, the immortals are souls that are reborn into new bodies and retain their identities and memories. There are quite a lot in the angel population, and a few in the human.  Many angels are near invulnerable as well, in that it’s really hard to kill them, though they will die of old age after a few thousand years. The reborn souls also tend to become more and more powerful with each rebirth.  The only known exception to this is Star’s older brother, Solar, he’s invulnerable and doesn’t age.  At least he was until–well, we’ll just go into that during his spotlight.