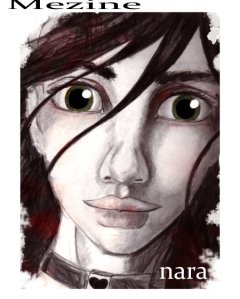 He is the overlord of darkness and Star’s husband in her past life. In his past life, he persuaded the other bizimwi to join the war and wipe out the angels. Right before the war rekindled, all demons who parented the bizimwi vanished mysteriously, Mezine suspected the angels were behind it and wanted revenge.

With the help of the bizimwi the Dark Empire had a fighting chance against the angels. The combination of human technology and demon magic had begun to turn the tide of the war, until they ran into Solar. With in a matter of days Solar had forced the Dark Empire’s army to retreat. Mezine was ordered to assassinate the angel at all of costs. He failed of course, and was held prisoner in the Silver Sun Palace, where he eventually fell in love with Star. With Nova’s help they escaped and secretly married. What happened next is unclear, but all three of them died, possibly at the hands of Solar who disappeared after that.

Once Mezine was reborn,he searched for Star and found that she (and Nova) had been reborn all the way on Earth. Mezine has vowed to destroy Solar once and for all so he can live a life of peace with Star, but now that the war has come to earth, that may never happen.

Legacy of Light is available in lots of formats, kindle version. Epub at lulu or ibook store or pdf from my etsy store